Severe Tropical Cyclone Charlotte is weakening off the north-west coast of Western Australia. It is expected to continue to move south-westwards during the next 24 hours and weaken below tropical cyclone intensity late Thursday.

From Friday, the low-pressure system is forecast to move south southeast and interact with another weather system to the southwest.

There will be a general increase in rainfall across the western half of Western Australia over the weekend as the system drags tropical moisture southwards. There is the chance of heavy falls of 20-40 mm in a broad area south of Shark Bay, with the most intense rainfall dependent on where the system moves.

While the system will no longer be a named tropical cyclone, it is expected to have gale-force winds around southern parts of the circulation as it moves south.

There remains uncertainty on the future location and wind strength within the system. If the system tracks close to the coast, damaging winds are possible for areas of the west coast on the weekend, most likely between Carnarvon and Lancelin.

The Bureau of Meteorology continues to monitor the system and liaise with emergency services.

Communities are encouraged to keep up to date with the latest forecasts and warnings on the Bureau's website and BOM Weather app and to follow the advice of emergency services. 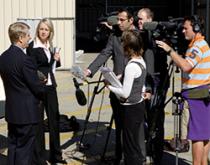