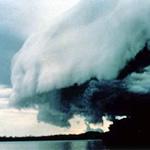 A 'southerly buster' (or 'southerly burster') is the term Sydneysiders have adopted for an abrupt southerly change that can charge up the New South Wales coast, mostly between October and February. Read on to find out more about this weather phenomenon!

What are southerly busters?

Contrary to popular opinion, this fast-moving southerly change is not unique to New South Wales (Tasmania, New Zealand and Argentina experience similar conditions), however in southeast Australia the proximity of the Great Dividing Range to the coast helps create these particularly fierce winds—often gusting well over 60 km/h.

Varying definitions of the southerly buster exist; we adopt the criteria of southerly winds gusting in excess of 29 knots (54 km/h) and a three-hour temperature drop of at least five degrees (during a 2010 study).They travel from the south coast of NSW to the mid-north coast, generally reaching their maximum intensity between Nowra and Newcastle.

Sydney receives an average of about five southerly busters a year, with the stronger busters usually reaching Sydney in the late afternoon or early evening after several days of hot weather. Temperature changes can be dramatic, with falls of 10–15 °C often occurring in less than one hour.

The leading edge of a buster is sometimes marked by a spectacular roll cloud running perpendicular to the coast—known as an ominous portent among Sydney's yachting community.

However, on most occasions there is initially little or no cloud, and consequently little visual indicator of the buster's onset.

How do they form?

Southerly busters typically form when a cold front passes over southeast Australia and cool air becomes trapped against the mountains of the Great Dividing Range, often in the Gippsland area of Victoria.

While the inland part of the cold front is trapped against the mountains, the part over the sea continues to move along the coast—distorting the front into an 'S' shape. This process continues on the southern New South Wales coast, while areas ahead of the front are experiencing hot northerly or westerly winds.

The phenomenon moves north as a shallow 'density current', which means the air behind the southerly buster is cool and dense in comparison to the hotter conditions ahead.

The speed at which the southerly change moves is related to the depth of the cool layer of air, as well as the density contrast between the areas of cool and warm air. The process is further assisted by the presence of the Great Dividing Range, which creates a channelling effect as the southerly winds move along the New South Wales coast. In the right conditions winds will accelerate rapidly, surging north with increasing wind gusts as the buster approaches Sydney.

A typical southerly buster is between 20 and 60 nautical miles wide, with the strongest winds centred on the coastal strip. The depth of the buster is limited by the height of the mountains to west, which are mostly less than 1000 m high. Above this height westerly winds generally prevail.

Southerly busters have the strongest winds at their leading edge. Particularly strong busters have peak wind gusts of 40 knots (74 km/hour) or more, and usually occur after very hot days. Gusty conditions tend to ease significantly within 30 to 60 minutes of the buster arriving, and in many cases winds become quite light within a few hours.

As busters rarely maintain a constant speed while progressing along the coast, forecasting their arrival time at Sydney can be quite challenging. Due to their strength, it is common for us to issue a wind warning for parts of the coastal waters, and on occasions we may issue a Severe Weather Warning for land areas along the coastal fringe.

The following southerly busters brought the strongest winds to Sydney.