Large parts of Australia are facing a hotter and drier summer than average, according to our summer outlook. Drier-than-average conditions are likely for much of northern Australia. Most of the country has at least an 80 per cent chance of experiencing warmer-than-average day and night-time temperatures. The threat of bushfire will remain high, with few signs of the sustained rain needed to reduce fire risk or make a significant dent in the ongoing drought.

Large parts of Western Australia, most of Queensland and the Top End of the Northern Territory are expected to be drier than usual. Further south, the rest of the country shows no strong push towards a wetter- or drier-than-average summer, which is a change for parts of the southeast compared to recent months. 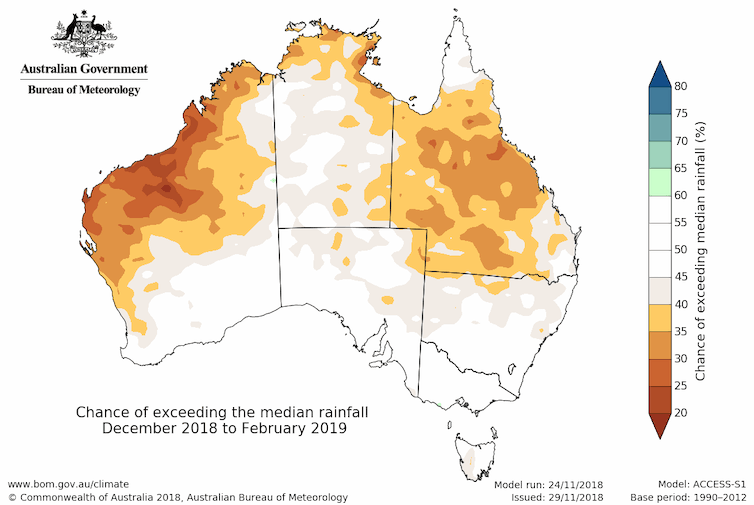 Queensland has already seen some extraordinary record-breaking heat in recent days, with summer yet to truly begin. With the summer outlook predicting warmer days and nights, combined with recent dry conditions and our long-term trend of increasing temperatures, some extreme highs are likely this summer. 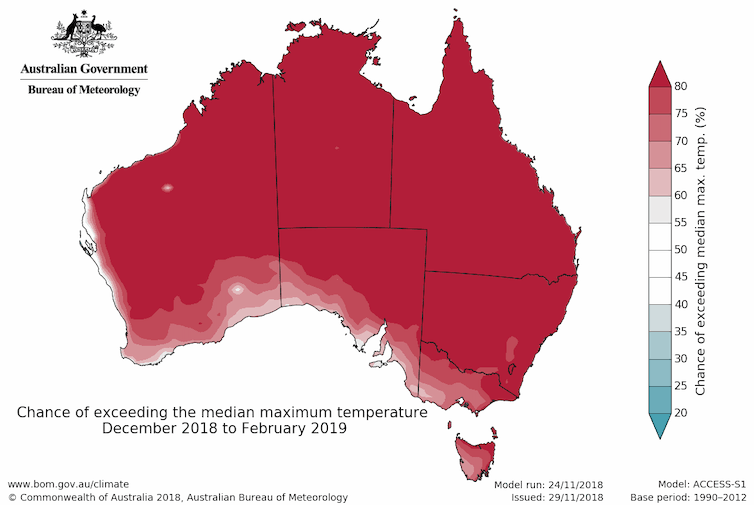 All of this means above-normal bushfire potential in eastern Australia, across New South Wales, Victoria and Queensland. The bushfire outlook notes that rain in areas of eastern Australia during spring, while welcome, was not enough to recover from the long-term dry conditions. The current wet conditions across parts of coastal New South Wales will help, but it will not take long once hot and dry conditions return for vegetation to dry out.

What about El Niño?

We are currently at El Niño ALERT, which means a roughly 70 per cent chance of El Niño developing this season.

However, not all the ducks are lined up. While ocean temperatures have already warmed to El Niño levels, to declare a proper 'event' there must also be a corresponding response in the atmosphere to reinforce the ocean—this hasn’t happened yet.

That said, climate models expect this event to arrive in the coming months. The outlook has factored in that chance, and the conditions predicted are largely consistent with what we would expect during El Niño. In summer, this includes drier weather in parts of northern Australia, and warmer summer days.

Once an El Niño is in place, weather systems across southern Australia tend to be more mobile. This can mean shorter but more intense heatwaves in Victoria and southern South Australia. However, in New South Wales and Queensland, El Niño is associated with both longer and more intense heat waves.

The exact reason why the States are affected differently is complicated, but relates to the fast-moving cold fronts and troughs that sweep through Victoria and South Australia in the summertime, creating cool changes. These weather systems don’t influence areas further north so when hot air arrives, it takes longer to clear.

The heavy rains seen in parts of eastern Australia in October and November have provided some welcome short-term relief to drought-stricken farmers, but longer-term rainfall relief has not arrived yet. If El Niño arrives, this widespread relief may only be on the cards in autumn.

Visit our website to view the latest outlook or subscribe now to receive climate outlooks direct via email.