The Bureau of Meteorology and CSIRO have released the fifth biennial State of the Climate report.

State of the Climate 2018 is the latest biennial snapshot of climate change in Australia. It focuses on observed long-term trends that are happening now and are likely to continue into the near future, as well as significant climate events that have occurred over the past two years. These changes are described through the latest observations from CSIRO and Bureau of Meteorology marine, atmospheric and terrestrial monitoring programs.

The report also summarises the latest climate research from Australia and around the world. This will help inform a range of economic, environmental and social risk assessments and responses by government, industry and communities.

Multiple lines of evidence show the climate system changing in ways that are discernible from natural variability, and consistent with a human influence on climate. These changes are having an impact on our natural and built environment.

In particular, climate change is being felt through an increase in the frequency and severity of high-impact weather events such as heatwaves, extreme fire weather conditions, coastal inundation and marine heatwaves. These trends are projected to continue.

Some of the report’s major findings are described below.

Australia’s average air temperature has warmed by just over 1 °C since national records began in 1910. Oceans around Australia have also warmed by around 1 °C since 1910.

Atmospheric concentrations of carbon dioxide are rising globally. Emissions from the burning of fossil fuels continue to increase, and are the main contributor to the rise in CO2, with some contribution from changes in land use.

Atmospheric CO2‚ concentrations measured at Cape Grim, Tasmania (one of three main global measuring stations, alongside Mauna Loa, Hawaii, and Nunavut, Canada), have persisted at levels above 400 parts per million (ppm) since 2016. What’s more, the combined concentration of all greenhouse gases exceeded the equivalent of 500 ppm CO2‚ in mid-2018. These milestones haven’t been crossed for at least 800 000 years, and likely 2 million years.

Changes in the atmosphere and land

Other elements of Australia’s climate have also shown long-term changes. New analysis techniques now provide a more detailed picture of changes to fire weather through time. The annual total of daily values of the Forest Fire Danger Index is increasing over large areas of Australia. Most regions also saw an increase in the most extreme 10 per cent of fire weather days, and fire seasons have lengthened.

Rainfall in April–October has been steadily decreasing in Western Australia’s southwest, and has decreased since the 1990s in southeast Australia. In contrast, rainfall has increased in parts of northern Australia since the 1970s.

A warmer atmosphere can hold more moisture, and this is an important driver of the observed increase in the intensity of short-duration rainfall, sometimes linked to flash flooding. Southern Australia is projected to experience decreases in average rainfall and more time spent in drought. Meanwhile, most of the country can expect an increase in rainfall intensity.

Historically, significant weather and climate events are often the result of the combined influence of several extreme factors at once. Higher temperatures during periods of below-average rainfall, for instance, can exacerbate drought conditions. Temperature, dryness and wind come together to create dangerous bushfire conditions. 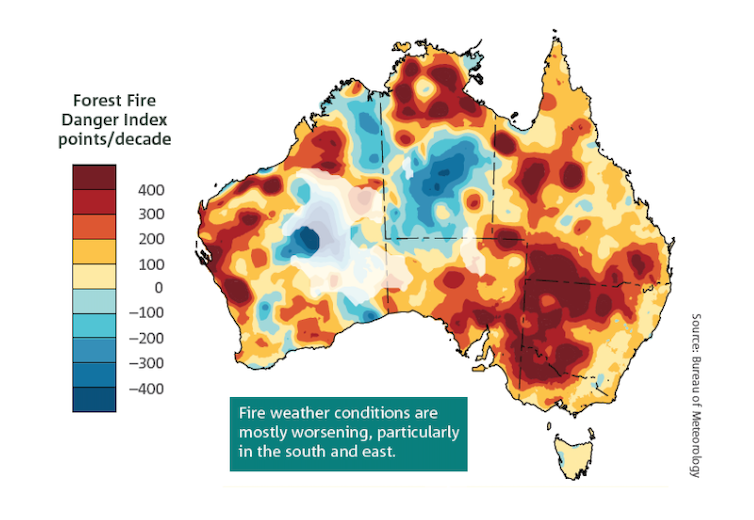 Changes in the ocean

The warming in Australia’s oceans has contributed to longer and more frequent marine heatwaves—defined as periods when sea surface temperatures are much warmer than average. The world’s oceans are a crucial moderator of the climate, taking up more than 90 per cent of the extra heat in the system—most of it is absorbed by the Southern Ocean.

Sea levels continue to rise through the combined effects of warming oceans and melting ice from land-based glaciers and ice sheets. Global average sea level has risen by more than 20 cm since 1880, but the rate varies from place to place. About 25 per cent of the CO2‚ emitted by human activity diffuses into the oceans, making them more acidic in the process.

The past two years, 2016 and 2017, have seen back-to-back bleaching events in parts of the Great Barrier Reef, linked to marine heatwave events. These changes are very likely linked to warming oceans, and primarily driven by the human influence on the climate. 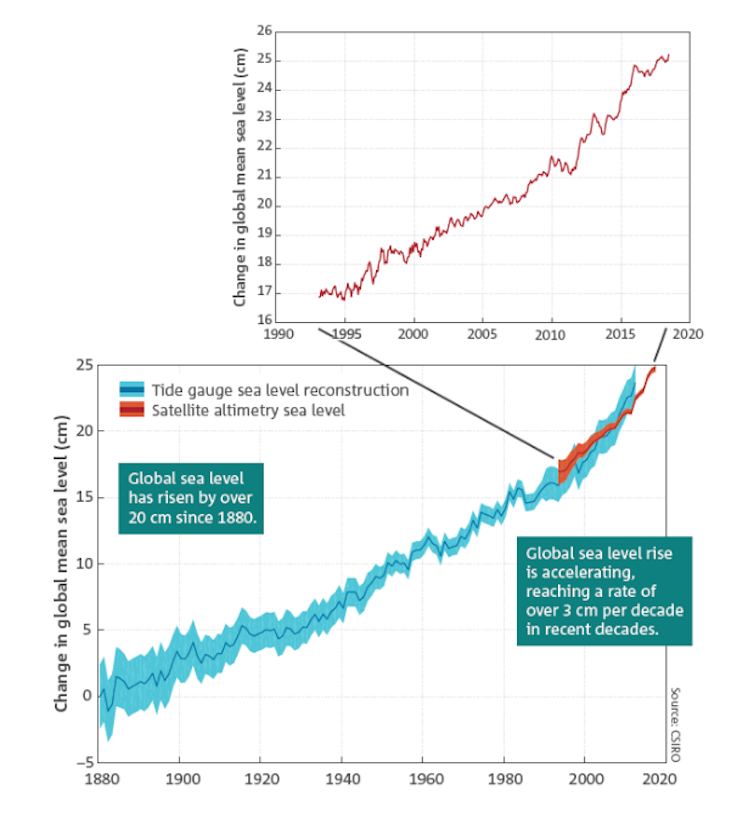 Well-established scientific theory and climate model studies both show that the warming would largely not have occurred without the increase in greenhouse gas concentrations. In addition, the current increase in temperatures accords with projections made nearly 30 years ago. Warming is projected to continue into the future as the effect of past emissions continue, and more greenhouse gases are emitted. Australia is projected to experience increases in sea and air temperatures, with more hot days and marine heatwaves, and fewer cool extremes.

It takes time for the climate system to warm in response to increases in greenhouse gases, and the historical emissions over the past century have locked in some warming over the next two decades, regardless of any changes we might make to global emissions in that period. However, by the mid-21st century, higher ongoing emissions of greenhouse gases will lead to greater warming and associated impacts, and reducing emissions will lead to less warming and fewer associated impacts. 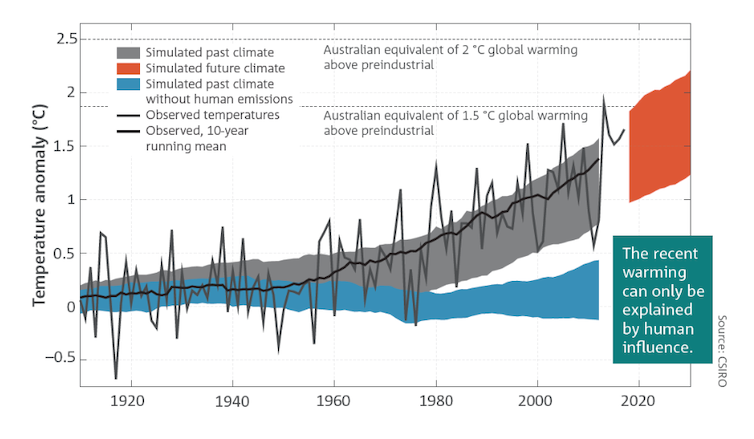 State of the Climate 2018 can be read on either the Bureau of Meteorology or CSIRO websites. The online report includes an extensive list of references and useful links.

You can also watch accompanying behind-the-scenes videos on our research on climate extremes and ocean warming.

The authors of the report are Michael Grose, CSIRO and Lynette Bettio, Bureau of Meteorology

State of the Climate 2016: Bureau of Meteorology and CSIRO