Last year was a time of exceptional weather and record-breaking heat according to our annual climate statement, which was released last night.

During 2018 we issued four Special Climate Statements relating to 'extreme' and 'abnormal' heat, and reported a number of broken climate records.

One of the headline stories for the year was drought across eastern Australia—centred on New South Wales, but also affecting Victoria, eastern South Australia and southern Queensland. 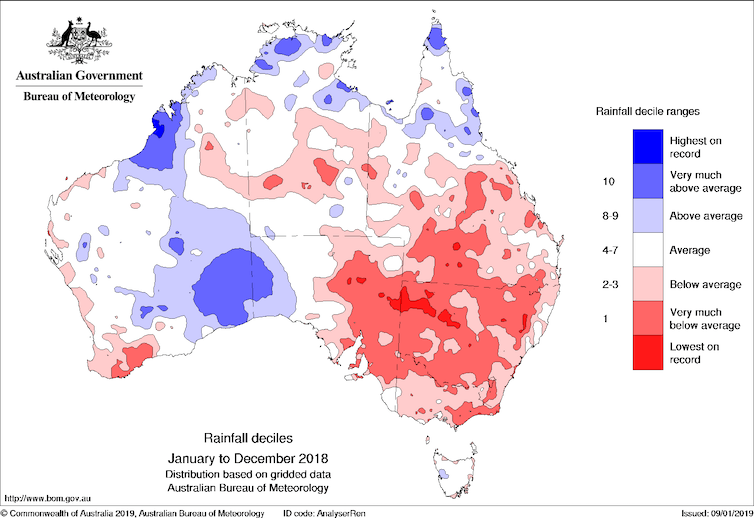 With the whole of New South Wales declared in drought during the latter half of 2018, this drought will be recorded as one of the more significant in Australia’s history, ranking alongside the Millennium, 1960s, World War Two and Federation Droughts. Of those historic droughts, only the Millennium Drought saw similar, accompanying high temperatures.

The below-average rainfall has persisted for around two years across much of NSW and adjacent regions. The drought conditions were particularly severe in the recent spring period, with low rainfall, persistently high temperatures, and record high evaporation.

This exceptionally dry period was influenced by sea surface temperatures to the west of the continent. Perhaps fortuitously, a developing El Niño in the Pacific Ocean failed to mature in the second half of the year. An El Niño would have typically exerted a further drying influence on eastern Australia.

The dry conditions in eastern states were severe enough to see Australia record its lowest September rainfall on record, and the second-lowest on record for any month—behind April 1902, during the prolonged Federation Drought. Over 2018, Australia’s annual rainfall was 11 per cent below average, and the lowest recorded since 2005, during the Millennium Drought.

In contrast, above-average rainfall was recorded across parts of the tropical north, and most significantly in the Kimberley, consistent with recent trends of increasing rainfall in that region.

The drought conditions were exacerbated by record or near-record temperatures across many parts of the country. It was Australia’s third-warmest year on record, behind 2013 and 2005. Daytime maximum temperatures were the warmest on record for New South Wales and Victoria, and second-warmest for South Australia, the Northern Territory and Australia as a whole. 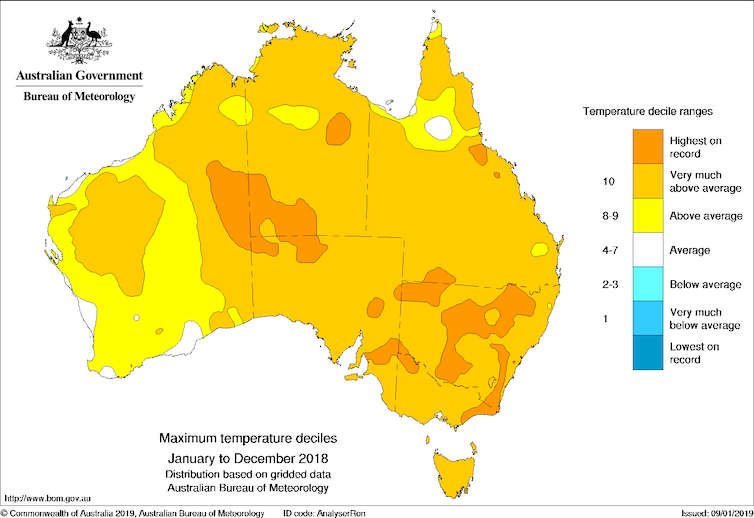 Persistent dry conditions through winter are typically associated with low soil moisture and heatwaves in the following spring and summer, and 2018 followed this pattern—with the added contribution of a warming climate.

The year ended with some record-breaking heat events. Perhaps the most significant of these was the extreme heat along the central and northern Queensland coast in late November and early December, which saw maximum daytime temperatures of 42.6 °C in Cairns and 44.9 °C in Proserpine on the 26th of November.

These temperatures, combined with persistent dry conditions in the preceding months, saw catastrophic fire weather and bushfires along 600 km of the Queensland coast, an event that fire agencies have called unprecedented for the state.

The year ended with a burst of heat over the Christmas–New Year period, with temperatures at least 10 °C warmer than average across southern South Australia, most of Victoria and southern NSW, leading to Australia’s warmest December on record.