Social > The winter was dry, the spring will likely be dry – here's why

The winter was dry, the spring will likely be dry – here's why

Winter still has a few days to run, but it’s highly likely to be one of Australia’s warmest and driest on record. While final numbers will be crunched once August ends, this winter will probably rank among the top ten warmest for daytime temperatures and the top ten driest for rainfall.

In contrast, parts of southern Victoria, western Tasmania and central Queensland were wetter than usual. 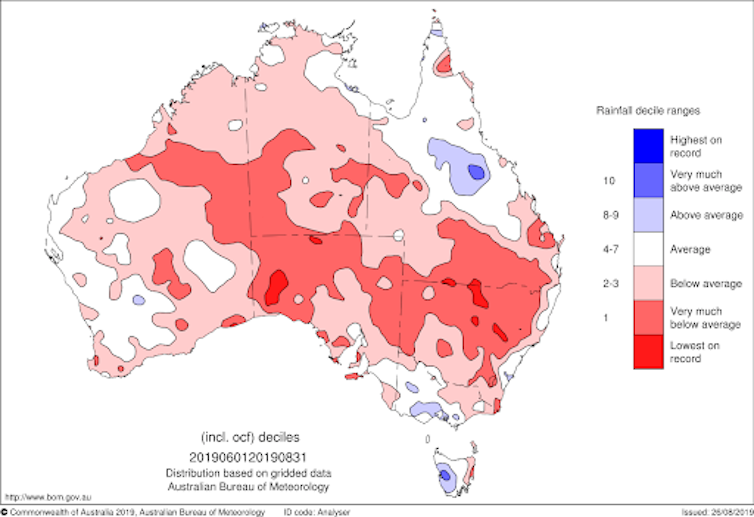 Soil moisture normally increases during winter (except in the tropics, where it’s the dry season), and while we saw that in parts of Victoria, for most of Queensland and New South Wales the soil moisture actually decreased.

Dry soils leading into winter have soaked up the rain that has fallen, resulting in limited runoff and inflows into the major water storages across the country.

A glass half empty

Sydney’s water storages dropping below 50 per cent received considerable public attention, and unfortunately a number of other regional storages in New South Wales and the Murray–Darling Basin are much lower than that.

Some rain in the west

Some regions did receive enough rainfall to grow crops this cool season. However, northern New South Wales and southern Queensland didn’t see an improvement in their severe year-to-date rainfall deficiencies over winter.

In fact, the area of the country that is experiencing year-to-date rainfall in the lowest 5 per cent of historical records expanded.

Sustained differences between sea surface temperatures in the tropical western and eastern Indian Ocean are known as the Indian Ocean Dipole (IOD). The IOD impacts Australian seasonal rainfall and temperature patterns, much like the more well known El Niño–Southern Oscillation.

International climate models, some of which forecast the positive IOD as early as February, agree that it is likely to continue through spring.

Typically, this means below-average rainfall and above-average temperatures for much of central and southern Australia, which is consistent with the current rainfall and temperature outlook from our dynamical computer model. The positive IOD is likely to be the dominant climate driver for Australia during the next three months.

Chances are the remainder of 2019 will be drier than normal for most of Australia. The exceptions are western Tasmania, southern Victoria and western WA, where chances of a wetter- or drier-than-average end to the year are roughly equal. 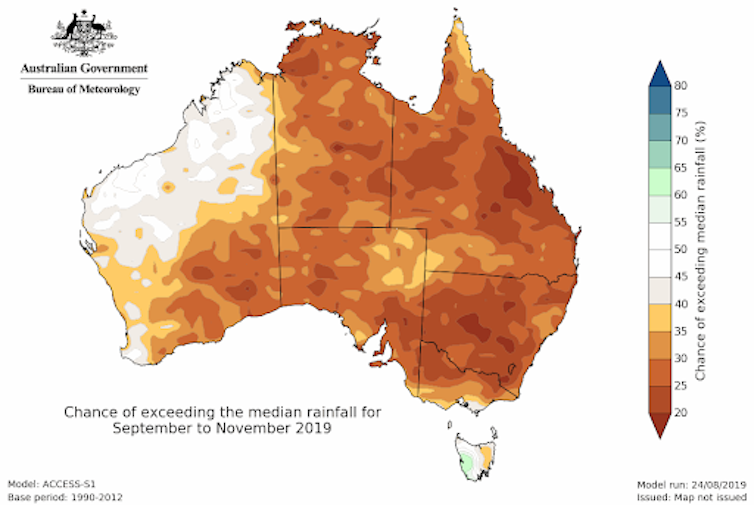 Map: The spring 2019 outlook showing low chances of above-average rainfall for most of the country.

Warmer-than-average days are very likely (chances above 80 per cent) for most of the country except the far south of the mainland, and Tasmania.

Due to the warm and dry start to the year, the east coast of Queensland, New South Wales, Victoria and Tasmania, as well as parts of southern Western Australia, face above normal fire potential this coming bushfire season.

The term 'weather' describes conditions over shorter periods, such as from minutes to days, while the term 'climate' describes the more slowly varying aspects of the atmosphere.

From today, we are closing the forecast gap between weather and climate information with the release of weekly and fortnightly climate outlooks.

For the first time, rainfall and temperature outlooks for the weeks directly after the 7-day forecast are available. One- and two-week outlooks have been added to complement the existing 1-month and 3-month outlooks.

The new outlook information for the weeks ahead also features how much above or below average temperatures are likely to be, and the likelihood of different rainfall totals. 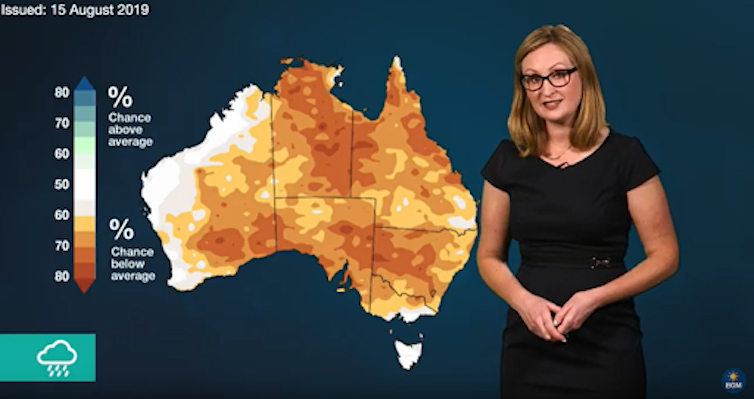 Image: Our outlook videos explain the long-range forecast for the coming months.

You can find climate outlooks and summaries here.

Recent Australian droughts may be the worst in 800 years

Why Sydney residents use 30% more water per day than Melburnians