Northern Australia is likely to see fewer cyclones than usual this season, but hot, dry weather will increase the risk of fire and heatwaves across eastern and southern Australia.

Today we released our forecast for the tropical cyclone season, which officially runs from November 1 to April 30.

Also published today is the October to April Severe Weather Outlook, which examines the risk of other weather extremes like flooding, heatwaves and bushfires.

On average, 11 tropical cyclones form each season in the Australian region. Around four of those cross the coast. The total number each season is roughly related to how much cooler or warmer than average the tropical oceans near Australia are during the cyclone season.

Map: The average number of tropical cyclones through the Australian region and surrounding waters in ENSO-neutral years, using all years of data from the 1969-70 to 2017-18 tropical cyclone seasons.

One of the biggest drivers of change in ocean temperatures is the El Niño–Southern Oscillation, or ENSO. During La Niña phases of ENSO, the warmest waters in the equatorial Pacific build up in the western Pacific and to the north of Australia. That region then becomes the focus for more cloud, rainfall and tropical cyclones.

But during El Niño, the warmest water shifts towards the central Pacific and away from northern Australia. This decreases the likelihood of cyclones in our region.

And when ENSO is neutral, there is little push towards above or below average numbers of cyclones.

Temperatures in the tropical Pacific Ocean have been ENSO-neutral since April and are likely to stay neutral until at least February 2020. However, some tropical patterns are El Niño-like, including higher-than-average air pressure at Darwin. This may be related to the current record-strong positive Indian Ocean Dipole – another of Australia’s major climate drivers—and the cooler waters surrounding northern Australia.

At least one tropical cyclone has crossed the Australian coast every season since reliable records began in the 1970s, so people across northern Australia need to be prepared every year. In ENSO-neutral cyclone seasons, this first cyclone crossing typically occurs in late December.

While cyclones are one of the key concerns during the coming months, the summer months also bring the threat of several other forms of severe weather, including bushfires, heatwaves and flooding rain.

With dry soils inland, and hence little moisture available to cool the air, and a forecast for clear skies and warmer days, there is an increased chance that heat will build up over central Australia during the spring and summer months. This increases the chance of heatwaves across eastern and southern Australia when that hot air is drawn towards the coast by passing weather systems. 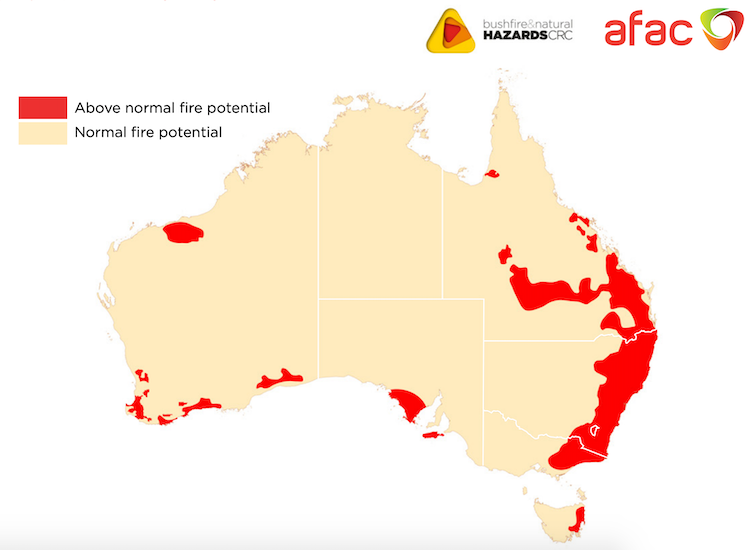 Likewise, the dry landscape and the chance of extreme heat also raise the risk of more bushfires throughout similar parts of Australia, especially on windy days. And with fewer natural firebreaks such as full rivers and streams, even greater care is needed in some areas.

Widespread floods are less likely this season. This is because of forecast below-average rainfall and also because dry soils mean the first rains will soak into the ground rather than run across the landscape.

However, as we saw in northern Queensland in January and February this year, when up to 2 m of rain fell in less than 10 days, localised flooding can occur in any wet season if a tropical low parks itself in one location for any length of time.

Most of all, it’s always important to follow advice from emergency services on what to do before, during and after severe weather. Know your weather, know your risk and be prepared. You can stay up to date with the latest forecast and warnings on our website and subscribe to receive climate information emails.

It's only October, so what's with all these bushfires? New research explains it

El Niño has rapidly become stronger and stranger, according to coral records