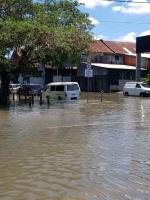 Social > Explainer: what is coastal inundation?

Explainer: what is coastal inundation?

The majority of Australians live near the coast, but the rise and fall of coastal sea level doesn't usually affect their daily lives. However, occasionally higher-than-usual tides can cause sea water to flow further onto land than normal. So, what causes coastal inundation and how might it affect you?

What is coastal inundation?

Coastal inundation is when sea water rises high enough that it floods infrastructure and buildings or endangers peoples' safety. Infrastructure is usually built in places out of reach of sea water, so you need unusually high sea levels before you see it.

Some typical impacts of coastal inundation include flooding of roads and walking paths, limited beach access and flooding of parks and reserves. This can have both short- and long-term impacts. While the event occurs it can pose danger or inconvenience to people but in the longer term it can cause infrastructure to degrade more quickly than it otherwise would have, which can have economic consequences.

Tides are mostly driven by gravitational forces from the relative positions of the Earth, Moon and Sun.

Tidal forces slide the deep ocean horizontally; rather than pulling water up. This sliding motion is greatly complicated by the Earth's rotation and underwater geography. Coastal tides reflect the way these global motions move over open oceans and into local waters. The effects of bathymetry (underwater geography) are the main reason behind the huge difference in tidal ranges around Australia.

Graph: Two years of water levels, considering only the effects of earth, moon and sun at Southport, Tasmania (top) and Mornington Island, Queensland (bottom). Note the difference in tidal ranges and seasonal patterns.

Storms over the ocean, close to your local coastline

Storms very near the coast can drive large deviations of sea level from predicted tides.

Coastal strong winds that are either onshore (blowing toward the shore) or parallel to the shore can push water toward the coast. Strong winds also whip up large seas that can drive water up beaches, crash over coastal barriers and contribute to coastal inundation.

Low pressure at the coast also contributes to storm surges as the water surface quickly adjusts to the change of atmospheric weight over the ocean. Lower pressure directly relates to higher water levels.

Storms over the ocean, far from your local coastline

Storms do not have to be nearby to play a role in coastal inundation. In fact, remote storms can affect the sea level and catch coastal communities off guard.

As surfers know, long-period swell (when the interval between waves is greater than 11 seconds) that forms a long way from the coast can very powerful. When these waves break near the coast, they can push a lot of water to the shore, especially when there is a steep drop from the beach to the deep ocean close to shore (seen in many Pacific islands) or the swell is especially large. This can cause local increases in sea level and can contribute to coastal inundation.

Less known is the way that remote storms can create temporary pulses of sea level change (both up and down). Scientists refer to this as 'coastally trapped waves'.

A coastally trapped wave is a surge of water that is generated by specific weather conditions (such as sustained and powerful winds blowing in a consistent direction) and then travels alongside the Australian coastline in an anti-clockwise direction. The 'wave' can travel for thousands of kilometres, triggering short-term changes in sea level and currents as it passes. It can last for days or longer—even after the weather conditions at its starting location have eased, and even if the area impacted doesn't experience the storm that drives the rise in sea level. Due to their long wavelength, coastally trapped waves are not as directly destructive as breaking waves. However, like a tidal surge, they can inundate low-lying areas and damage coastal infrastructure. They may worsen the impact of other weather and tidal conditions such as storm surges and very high tides. Changes in sea level and currents from a coastally trapped wave can produce dangerous and unusual conditions for coastal activities such as rock fishing, boating, and swimming.

This means that a storm on the coast of Western Australia can later lead to coastal inundation in New South Wales on a sunny day, by pushing the sea level higher by tens of centimetres.

Normal tides and storms drive sea-level changes that occur over hours and days. But the slower-moving patterns of ocean temperature, salinity and volume also have an impact.

Ocean circulations and phenomena such as currents (e.g. the Leeuwin current or East Australian Current) and sea surface temperature patterns like El Niño–Southern Oscillation (ENSO) and the Indian Ocean Dipole (IOD) can also cause sea levels to rise or fall over months.

Mean coastal sea level is fundamental to how we measure height above land and plan land use. Mean sea level gradually changes over years and centuries, and this affects coastal inundation frequency and location. Global sea level has risen by over 20 cm since 1880, and the rate has been accelerating in recent decades. The global rise in sea level means that tides, waves and storm surges now all occur on top of a higher 'base' level, increasing the how high the water rises onto land.

The risk of coastal inundation is dependent on multiple factors, as well as the surrounding geography (e.g. if the town is on a hill or the beach). The impacts of coastal inundation are most severe when two or more variables occur together (a 'compound event')—for example, as seen in the photos above (high tide and large swell) and below (storm surge, high tide, large swell).

Communities along rivers and estuaries can also be affected by the compounding effects of heavy rainfall and rising sea level. Quite often the same storms that produce storm surges also dump heavy rain. So swollen rivers and storm-water systems can play a large role in coastal inundation events, in addition to the impacts along the beach, such as erosion or build-up of sand.

The Bureau provides a sea level anomaly forecast which considers the impact of ocean patterns, and local and remote storms on sea levels. How can I help support sea level forecasting?

Would you like to help improve your local sea-level forecasts?

The more information we have about coastal inundation events, the better we're able to assess how frequently they happen and issue warnings so communities can be prepared.

We're looking at reports from historical events to calculate how high sea levels must be to affect coastal infrastructure. However, lower-impact events aren't so well documented, and there's evidence to suggest their frequency may be changing—so if you notice these occurring near you, please send us your photos via Facebook, Twitter, Instagram or photo@bom.gov.au—and include the date, time and postcode.